We were awakened at 6:15 yesterday by the din of wailing sirens—LOTS of them—and lay there, wondering what they meant. Prying ourselves out of bed, we saw the owner of the 52’ Carver behind us securing his boat with duplicate lines and fenders, and so we followed suit, knowing the forecast was for severe thunderstorms. The person who answered Steve’s call to the local police station did not know what the sirens meant. As the wind picked up, Steve directed me to open all of the isinglass on the flybridge. I dragged up there and gazed for a moment at the objects, both equipment in use and “in storage” waiting to be taken home to Goshen. I simply could not bring myself to totally open the space, so I vented the zippered closures and thought—well…magical thoughts. I gathered the portable items and stowed them in the salon, where they would stay dry. Upon noticing this, Steve, of course, would have none of it, so together we rolled up those big isinglass windows, opening the flybridge to reduce windage, but also to welcome a sure and thorough soaking of the space that is, in very different weather conditions, so inviting. Not until later did we learn that those sirens announced a tornado having touched down 20 miles downstream and heading straight toward Florence. To officially usher out hurricane season on the Gulf today with a tornado nearby feels ironic, indeed.

Charming Florence, childhood home of Helen Keller and seedbed of the Muscle Shoals Sound, offered  up unique “aha!” insights and interesting trivia. With the marina’s courtesy car, we first checked out the local ceremonial mound of Native American people from as far back as 10,000 years to its most recent history whose end is marked by the Trail of Tears in the 1830s. Impressive collections of stone tools which have been uncovered from the various ages are on display, but the question as to precisely how the mound truly functioned in the life of the Native Community remains a mystery.

We enjoyed touring the Usonian Frank Lloyd Wright home known locally as the Stanley and Mildred Rosenbaum House. A wedding gift of $7500 from Stanley’s parents funded the purchase of 2 beautiful acres (across the street from said parents’ house) and the design and construction of this modest home. Wright’s vision was to build vast neighborhoods of these utilitarian, expandable designs for middle America in the 40s. The failure of this vision to come to fruition necessitated that he return at the end of his career to designing homes for the wealthy with beautiful materials and no budget constraints. Rosenbaums’ home exemplified the typical Wright profile, flat-roofed with horizontal windows high along the roof line, a single carport, and emphasis of the landscape and gardens in back, rather than “curb appeal,” which was not a consideration at the time. Extensive use of plywood and cement was remarkable; and all blended into an efficient and warm aesthetic, blurring the distinction of indoors and out. Ten years later, Mildred finally got her “big” kitchen in their addition that Wright had refused to include in the original rendition, and their 4 sons were moved from 2 very small bedrooms to a large common room adjacent to the kitchen, with built-in bunk beds and individual toy chests. This room became the couple’s TV room after their sons left home, a late concession by the movie theater mogul that TV was here to stay. Highly respected movie critic, Jonathon Rosenbaum, is one of their sons. 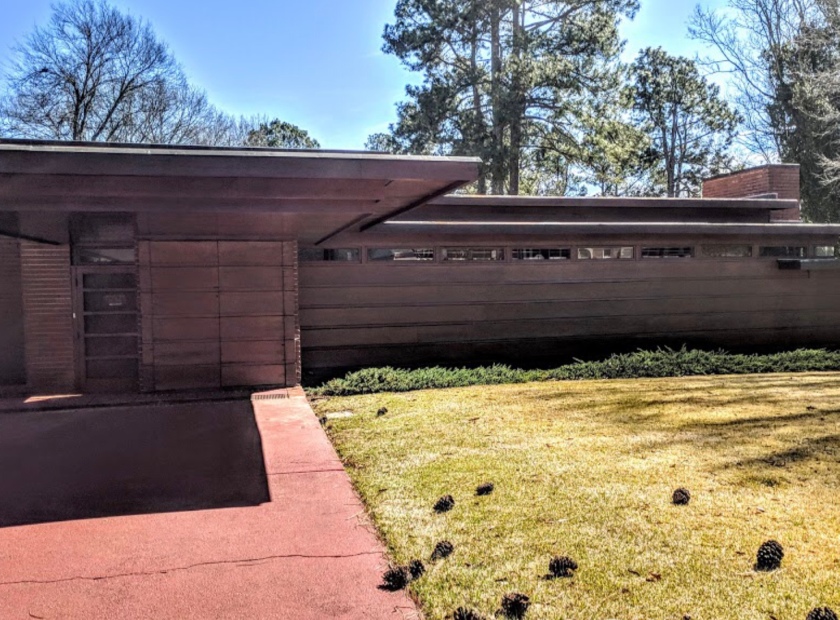 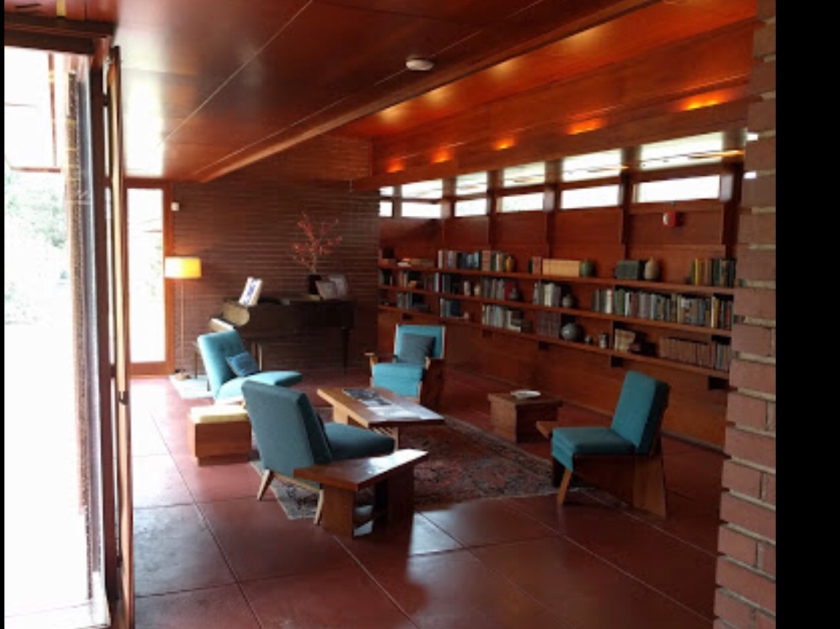 We began lunch with dessert at Trowbridges, known for their orange pineapple ice cream. Even I had to try it, passing up flavors like “salted caramel apple pie” for the flavor that put Florence on the map in 1918. Next door we were seated by Marilyn Monroe and served a great Mexican lunch by Spider-Man, it being Halloween. 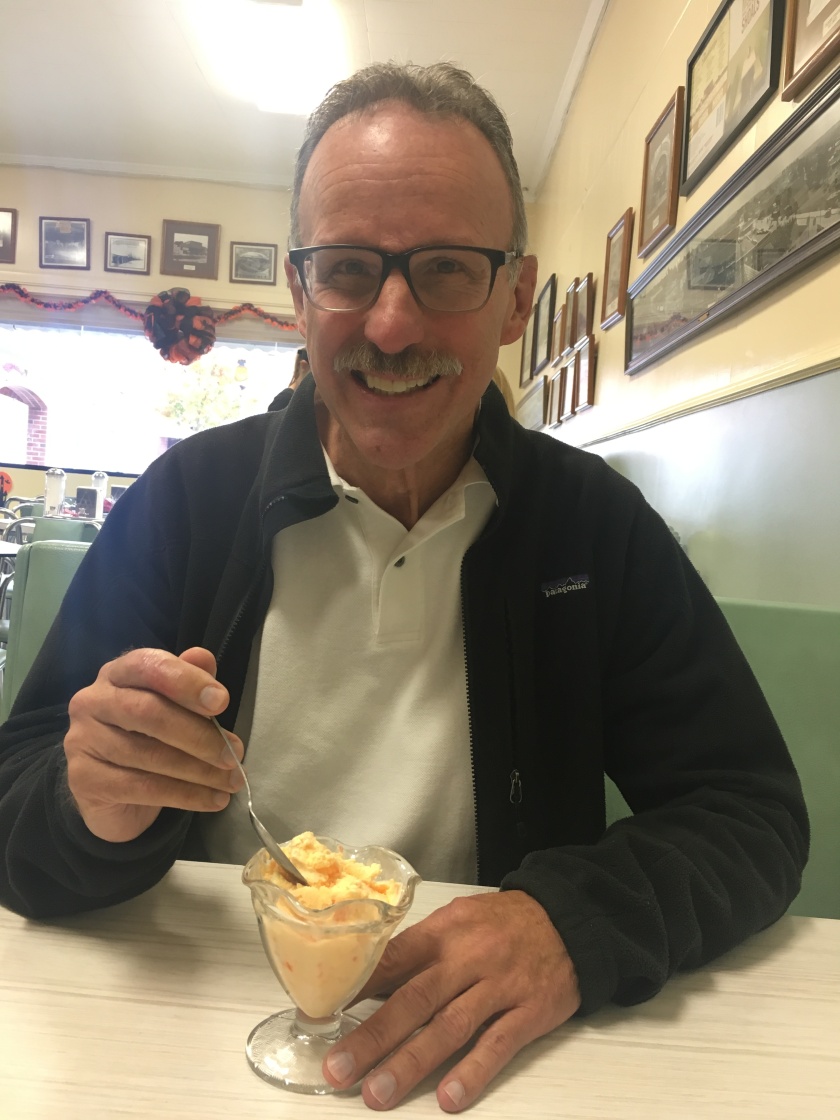 The following day, the day of the sirens, we again set out for an exposure to a world to which we feel only tentative connection—the recording industry and the rise of music with Southern roots—country, blues, R&B, and gospel—all, my absolute favorites! 🤢 On the tour, only Steve and I had never heard of icon, Rick Hall. Founder of Florence Alabama Music Enterprises, FAME, in 1959, Hall was the complete package—songwriter, music publisher, recording technical director, talent scout—with instincts for concisely emotive storytelling, lean arrangements and solid grooves. In segregated Alabama in the 60s, black and white performers collaborated at FAME: “It was a dangerous time but the studio was a safe haven where blacks and whites could work together in musical harmony,” Hall wrote. Artists who have plied their craft in those humble studios are Aretha Franklin, Wilson Pickett, Etta James, Otis Reading, the Osmonds, Paul Anka, Little Richard, Willie Nelson, and Jason Isbell…and many more (said the violinist whose head was buried in the practice room during those years). Rick Hall passed away in January, 2017, but the studio soldiers on, led by his wife and son. Up the street 10 minutes is Muscle Shoals Sound Studio, started in 1969 by 4 young, local session musicians who left FAME due to a contract dispute with Rick Hall. The guys, given the affectionate name “The Swampers,” caught the attention and patronage of one of Hall’s competitors. Jerry Wexler’s $20,000 loan to set up this facility allowed these wildly talented musicians to preserve their autonomy, setting free their amazing artistic instincts. The studio only functioned as such for 9 years, but in those years legendary greats such as Cher, the Rolling Stones and Linda Ronstadt, Paul Simon, Lynyrd Skynyrd, Rod Stewart, “and many more” recorded there. On virtually all of the albums, the 4 owner/musicians were pivotal and significant musical collaborators. The business entity continued in other venues for many years, and three of the four continue rockin’ it out today. Funds from Beats Electronics and Dr. Dre enabled a nonprofit to fully reclaim and recreate this hallowed cement-block structure on the National Register of Historic Places where the magic of 3614 Jackson Highway is still sensed and revered by adoring fans. 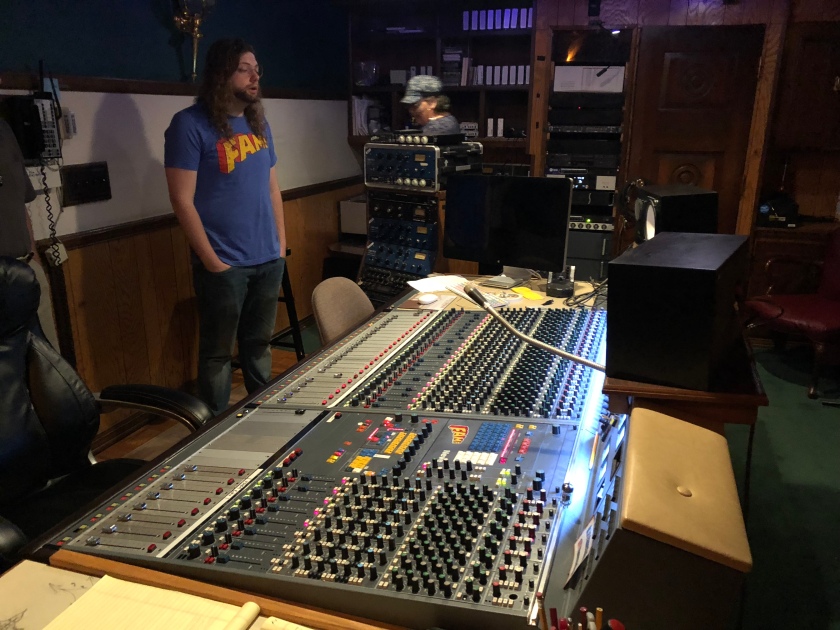 Our visit to Florence ended with dinner at Ricatoni’s, a local favorite for Italian cuisine, with new acquaintances Skip and Bev Schmidt from St. Ignace, Michigan, who are looping on Lark. Having resided in Florida during their early marriage, they are lifetime and expert sailors and racers, and have volunteered their services in the Marshall Islands and Tunisia. He, a high school English teacher and she, a pianist, we shared many interests, and all made for a delightful evening. Tomorrow we leave the Tennessee River and begin to wind south, seeking the sun!

One thought on ““Sweet Home, Alabama” in Florence”