No drama = Bliss. It was a boring week of exploring in the sunshine and seamless contentment.

With delightful cruises oceanside down the chain of keys, we arrived in Key West a day ahead of schedule. Some of our first looping friends, Mike and Brenda Finkenbinder on Velsignet, had arrived the day prior, and it is so much fun to be with them again. Right away they invited us for lunch on their flybridge, and we have been going back and forth all week. Afternoon exploring, early dinners followed by cards are the routine, but not the rule. Here are some of the sights we loved.

Emphasis on “Party,” the TV setup and arrangements complements of Mike and Brenda in the marina Captains’ Lounge. Twelve of us gathered, docktails style.

Hemingway lived here from 1931-39 and owned it until his death in 1961. The 1851 house sits on a beautifully-landscaped, one-acre property on which 59 cats, all decendents of Hemingways’ 6- and 7-toed cats, still rule. The house is simple but lovely, and features beautiful chandeliers and the first bathroom in Key West with running water. Hemingway’s cozy writing studio here is where he wrote The Green Hills of Africa and To Have or to Have Not. The docents enjoy regaling guests with stories of this renowned, colorful and accident-prone author, who struggled with bi-polar disorder his whole life. They particularly enjoy telling the story of the extravagant $20,000 in-ground pool which his second wife had built during the Great Depression. To make room for it, she tore down Hemingway’s boxing gym. She had always wanted a pool, but through it, she got revenge for his galavanting around Europe with another woman. This story and others are a striking backdrop as one views his hallowed writing studio lofted above the carriage house. Of course, the myriad of cats lend their unique zen. 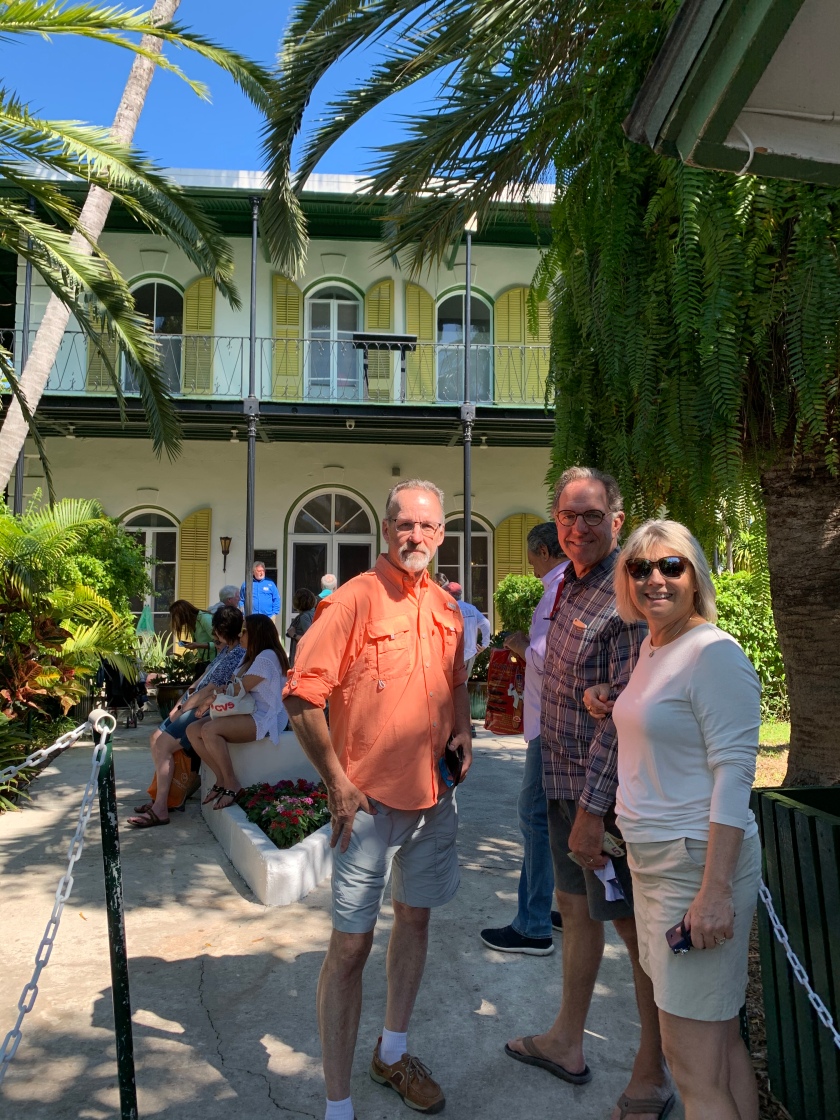 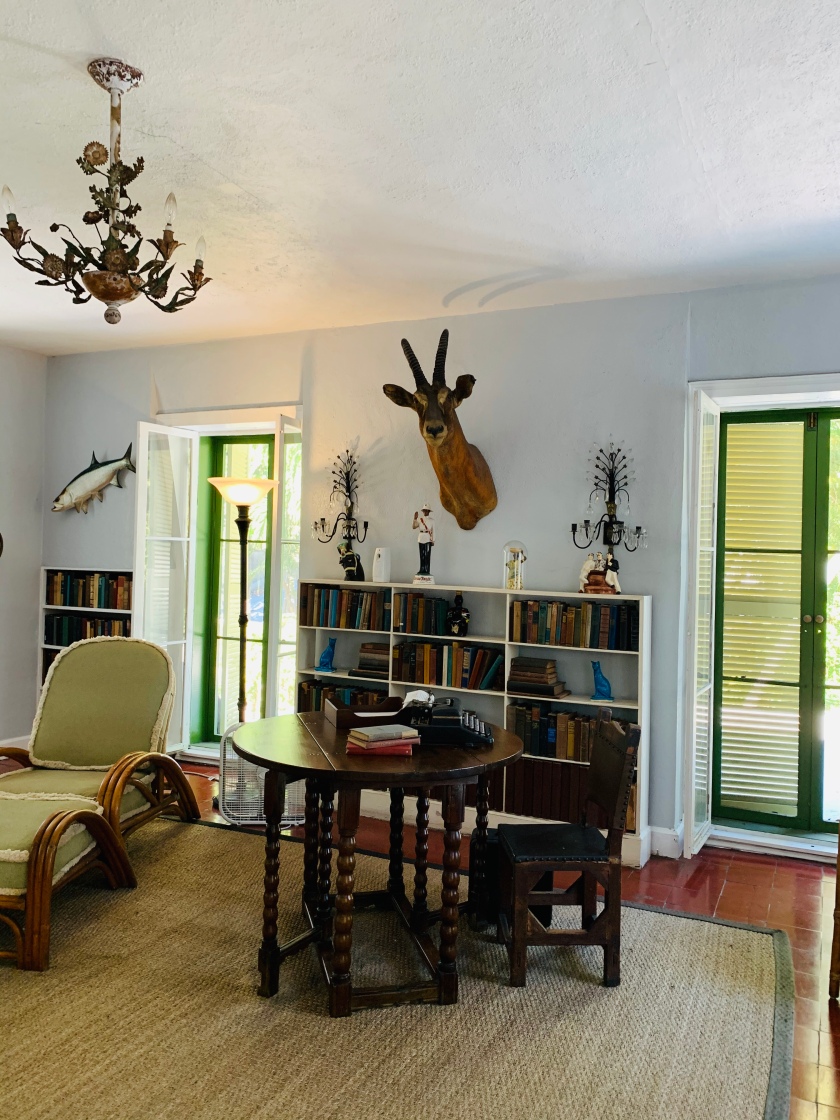 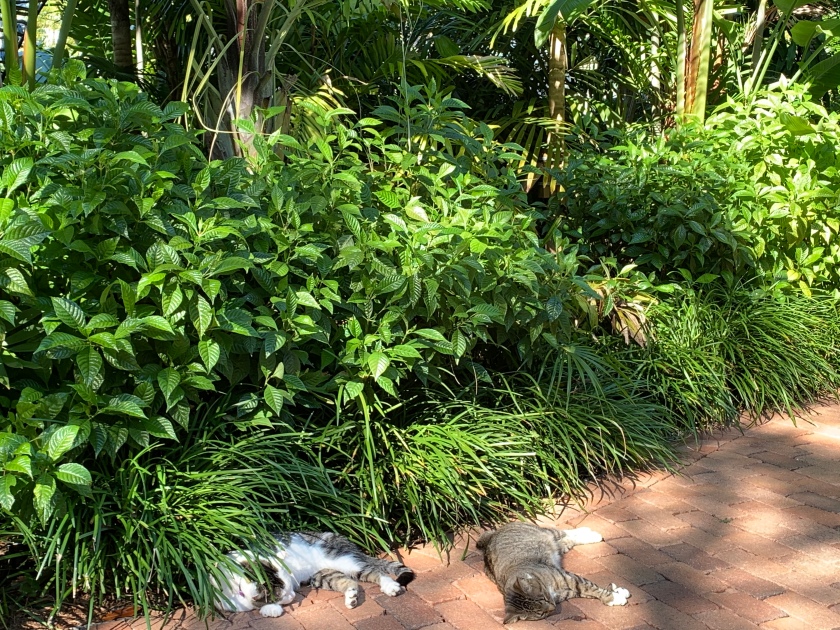 Beautiful and calming. A sacred experience.

Another walk through a snippet of history. The house was built in 1890 as the first officer’s quarters on the submarine base naval station. It was redesigned as a single-family residence in 1911, and Pres. Taft was the first president to visit. Thomas Edison resided here for 6 months during WW I while developing 41 underwater weapons. Truman’s struggle with depression was abated in the warm climate and away from the microscope and hostilities of Washington D.C., and he spent 175 of his presidential days here—more than any other president—as commander in chief of the naval base and in meetings with his cabinet. Continuity of his many accomplishments was prioritized here, but Truman enjoyed plenty of light-hearted camaraderie as well, including evenings around the custom-made poker table. Presidents Eisenhower, Kennedy, and Carter also spent working vacations here, while the Clintons retreated here for a weekend following their attendance at the Trumps’ Miami wedding in 2005. 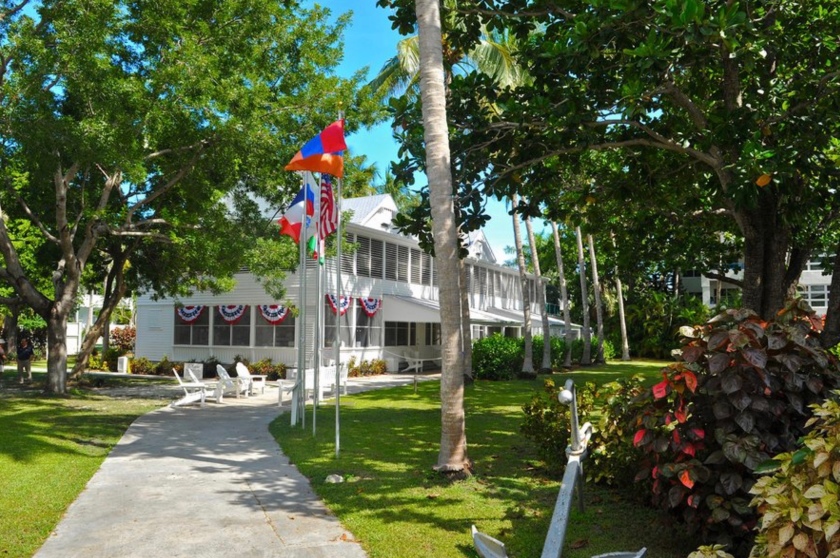 Rum, Gin, and Vodka Tasting on Site here at the Perry Hotel

A distillation tour is always an interesting chemistry lesson, but the taste is not one I am work to develop anytime soon.

Full disclosure: Brenda and I shopped while the guys took in the museum. This tells the sensational story of Mel Fisher, who as an Indiana boy was riveted by Stevenson’s Treasure Island. He went to Purdue, came to Key West as a treasure hunter, and subsequently learned of a treasure-filled Spanish ship which wrecked 50 miles off the shore of Key West in 1622. After a 16-year search, and many losses and set-backs, Mel discovered the ship in 1985 with its $500M worth of treasure. The Spanish wanted it back. Florida wanted tax revenue. Others held claim for various and sundry reasons.  But after a 4-year legal battle, the Supreme Court ruled that the treasure go entirely to Mel—and his lawyers! There are still artifacts—mostly silver coins—available for purchase today. Here we are, hearing more stories at a local jeweler which features sale of some of the last of these treasures.

One thought on “Week One in Paradise”